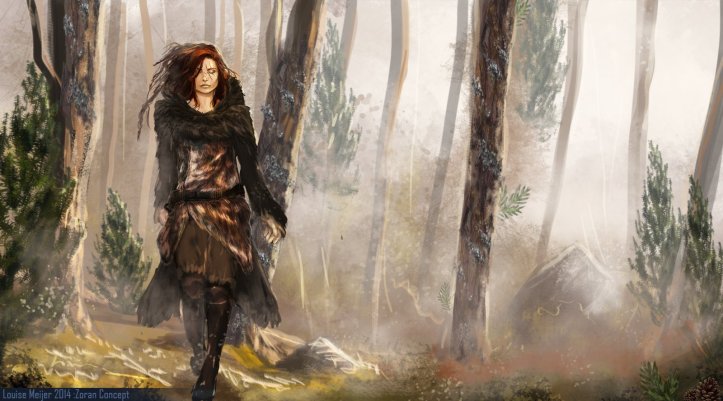 Guan-yin Zeng was born in Shanghai, China, the city with the most people in the entire world. New York seems like a Iowan farm town compared to this concrete jungle. The apartment buildings stacked on top of each other, overflowing into each other’s architecture and fighting for space. In this city, with more people than most countries, a profoundly unique person had come into this world. Her parents didn’t know it now, but she would grow into the world’s last rabbit foot harvester.

Guan-yin was 5 years old when she captured her first rabbit. It was so easy it actually surprised her. She had reached out her hands towards the small grass eater expecting her to jump back, instead she found that the rabbit warmed to her touch. Unsure what to do, she cradled the rabbit in her lap and combed the dirt out of her hair. After a couple of minutes, the rabbit slowly hopped away and Guan-yin never saw her again. But, she knew in that moment, even at a young age, what her destiny in life was to be.

As soon as she reached the age of 13, Guan-yin convinced her parents to send her to a boarding school in Swords, Ireland. However, this was just a ruse to her into the country, the real action was going to take place in Drogheda. Guan-yin had read online that there was a rabbit healer there who could teach her the ways of the art. What she didn’t expect, was a quest for revenge.

When Guan-yin arrived in Drogheda and went to the location on GoogleMaps, all she found was a run-down cottage with a slain Irish man on the rug. This Irish man was exactly who she had come to see, but she could tell from his cuts that this wasn’t a normal killing. The blood on the floor and near the open wound was shining and stagnant. This was the work of a witch.

She followed the trail of shiny blood that led her deeper into the woods, keeping an eye out for sudden movements or flying arrows. Before long she discovered a hole in the ground where the blood trail ended. Or entered. The darkness was so full and enveloping that she couldn’t see past the entrance. Not wanting to back down from a challenge, Guan-yin crawled deep into the tight cave and after a few minutes of squirming emerged into a larger cavern.

Before she could react, a long, Grinch-like hand grabbed her by the arm and threw her to the ground. Standing in the light of the hole she had just emerged from was a hunched over Green Witch with flaming yellow eyes. She lunged at Guan-yin but tripped over a rock and fell short. Still shaken from hitting the ground, Guan-yin didn’t notice at first that the witch had stopped moving, but once she did she took a few steps back to assess what had happened. A pool of blood then peaked out from underneath the witch’s stringy hair and Guan-yin knew she was safe.

Since she had done her homework before her trip to Ireland, Guan-yin pulled the Bowie knife from behind the witch’s left leg and used it to cut off her shin at the calf. As soon as the bloody stump was fully disconnected, it transformed into a rabbit’s foot. This was the first rabbit’s foot that Guan-yin had taken by herself and she knew that her life would be full of good luck since she had taken it from such a powerful Green Witch. Guan-yin returned to Shanghai a few days later a changed woman, full of hope and fear for the future that lay ahead.

It was obvious that her plans had changed now that the mentor she had sought out had been brutally murdered by a witch who takes everything good about rabbits and uses it for evil. Thankfully, the Irish Occultist had been brought to bear, but there had been rustlings in the message boards that a greater evil was rising.

Guan-yin spent the next few years training, reading, and developing her combat skills. By the time she was 19, she had already led multiple conquests against Bay Witch strongholds along the Chinese coast and harvested enough feet for her entire family to blessed by their good luck. On her 21st birthday, Guan-yin knew that she had fully mastered the art of both witch killing and rabbit healing when she beheaded the Witch Lord of Majuro in front of his subjects.

The youngest master of her age, Guan-yin soon became blinded by her power and fell in love with another harvester named Gwen. While they were so distracted by their love, the witches began hunting down harvesters and silently offing them one by one. Before Guan-yin could do something, there was nothing left to do. Her pride had given her a false sense of security and it wasn’t until Gwen was taken from her that she realized what she had lost.

On fire with rage, Guan-yin, the last rabbit’s foot harvester, singlehandedly invaded the Witch Queen’s castle and returned with the foot of every witch she found, including the Queen’s. The tides of the war had turned, and even though there was only one harvester left, the witches never could pull their lines back in formation. Most of them returned to the simple lives they had been living in small bergs across the world, but Guan-yin wasn’t done.

The global terror that Zeng had struck with the witches had prompted many of them to return to rabbit form in order to more easily hide. However, Guan-yin was still the most powerful harvester in the world and she knew their tricks. Her days were spent resting while her nights were spent in graveyards, rooting out witches disguised as rabbits and killing them with silver bullets. Any good rabbits were taken back to her farm and taken care of by her parents.

The luck that she has accumulated throughout her life leads some to believe that Guan-yin has achieved immortality, but it is still too soon to tell. We do hope that she will always be with us, saving us from threats unknown and providing us with luck and fortune. It feels good to know that there is someone out there fighting for what is right.

This article was written by Nathan Ellwood, who used to have a rabbit’s foot, but it came with the rest of the rabbit and he had to feed it and change it’s litter. Seems like way too much work. Follow him for more on Twitter @NPEllwood.