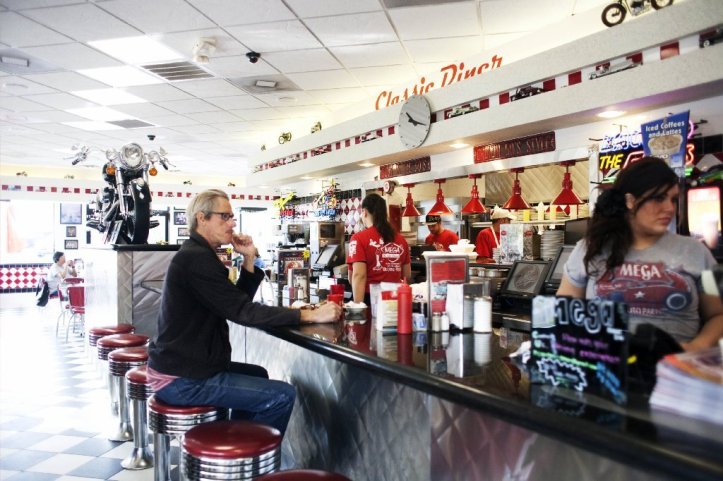 (Madison, WI) Today marks the first anniversary of the day that Ricky McClintock woke up in a sweat and decided to change the theme of his entire diner into a pork chop selling machine. Now, a year later, Ricky is one of the biggest internet hits since then Numa Numa guy and his entire life is different. “I simply knew that pork chops were the perfect food and that anything less just wouldn’t cut it,” Ricky explained. “I threw away all of my eggs, my pancake batter, my blueberries, and my bagels. After that, it was nothing but pork chops.”

The local paper found this change in menus to be interesting, but not worth a better position than page 11 near the obits. However, for some reason, everyone still saw it in the paper. Soon, people began to trickle into the store just to see if the pork chops were even good. Word spread of this quirky diner across the state and only a few weeks later, there were much bigger papers trying to get the story.

Ricky had to hire additional staff to keep up with the influx of customers as more and more people read the story of a bold man who decided to do what he wanted with his business and take risks like a true American. Soon, Ricky was on the cover of Restauranteer Quarterly and had a feature in the Bone Yard Times about his business savvy.

“I love pork chops. I had always loved them when Mother would grill them up in the summer, but I never thought I’d be where I am today. I am now grilling up my pork chops for the world, and soon, more will enjoy my tasty chops. We are opening a second location in August and we are looking forward to building a new community around our customers there in Muncee.”

Ricky, drunk on success, decided to open a second location in Muncee, Indiana to the surprise of many since it was so far away from the original. Ricky was eventually able to convince everyone that is was a good idea and they opened up their second shop to enormous success. Over the course of the next few months, Ricky opened a total of 7 locations across the Midwest where passersby could stop in for a scrumptious chop and be on their way. Ricky had never dreamed he would have such a roaring success.

“My niece and nephew came to visit and they took this video of me frying up some pork chops over the counter and before I knew it, Buzzfeed was writing a story on us. I have no idea how the internet works, but I guess I have it and those kids to thank for getting their college paid for. I hope that I get to keep making pork chops for the rest of my life.”

Unfortunately, Ricky’s 15 minutes of fame were up and the magic began to wear off. Over the course of the next few weeks, each location sunk to even lower and lower sales. New articles started coming out about the negative aspects of eating too much pork and something about a “ghoul infestation” at one of their locations, leading them to have to spend extra time fighting a PR nightmare instead of running the ghouls off. Despite his best efforts to overcome, Ricky soon closed all but his original location.

“I just never thought I would have to go back to my old lifestyle. I know it was only a couple of months, but I liked it. I thought my worrying days were over. Now I’m back to cooking three pork chops a day, but they are all for myself. No one comes in anymore. I don’t even have a staff. It’s just me and this mop. Happy Anniversary, I guess.”

And that is where we leave Ricky, alone on the anniversary of his infamous idea, mopping up an empty restaurant to the soft sound 80s synth. It’s hard to see Ricky like this since we knew him when things were good, but we think he’ll bounce back. Sometimes it’s just hard being famous on the internet because the internet found a new you 20 minutes ago. We wish Ricky the best and hey, maybe you could just sell t-shirts with your company logo on it and people will get it since you’re the chop guy? Ooh, or you could make a shirt that says “Don’t talk to me until I’ve had my morning pork chop.” Just spitballing here.

This article was written by Nathan Ellwood, who only eats pork chops because they remind him of Minecraft. Follow him for more on Twitter @NPEllwood.