The Cyclical Nature of Fashion: Penny-Farthings Are Cool Again

Are you looking for the hottest accessory this side of the Mississippi? Then boy do I have good news for you. According to fashion scientists around the globe, the new trend that is sweeping the history bars and replacing cars is coming back all the way from 1869. That’s right, the penny-farthing is cool again. Now, you may already be an old-timey and own a penny-farthing and good for you and all that. But this article is mainly for those of us who have never been bold enough to ride a tall-wheel around town. It is also for people interested in the cyclical nature of fashion. So, something for everyone.

For those of you not born in the late 19th century who don’t know what a penny-farthing is, you actually do, you just don’t know what they are called. Look, here are some examples. 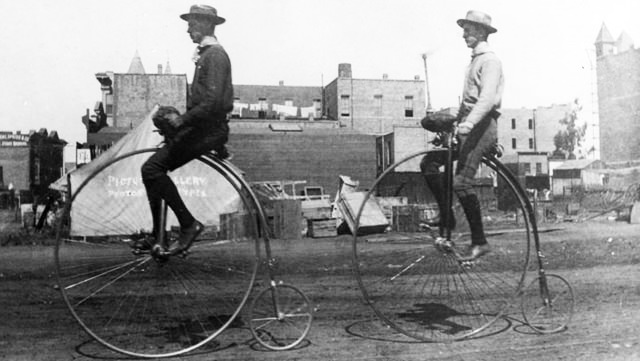 Look at those bad boys. Here’s one more for good measure.

So, after 150 years of waiting in the wings, these marvels of engineering are making a comeback in full force, especially within the hipster community. I personally would love to ride one, I never have. I only get to report on them. Such is life.

Okay, so in fashion terms, what is happening with penny-farthings is something known as a resurgence. There have been lots of these recently. For instance, high-waisted jeans, lollipops, and gum shoes. These happen quite a few times every year and can be hard to spot, but once you notice them, you can’t turn your brain off to it. Fashion police everywhere have wildly differing opinions on whether or not penny-farthings are ‘in,’ but if the people have spoken, they are. And ultimately, fashion is all about the people.

If you have been looking for that new thing to add to your personality, this might be it. I mean, when I say penny-farthings are hot, I mean that they are poppin’ out of control. Get in on this now, I’m telling you.

And no, I didn’t accidentally order 3,500 penny-farthings off eBay when I was drunk last week. Or if I did, it is unrelated.

This was written by a man from Texas *gasp* this one.