Buc-ee’s: A Story of Love, Vengeance, and the American Dream 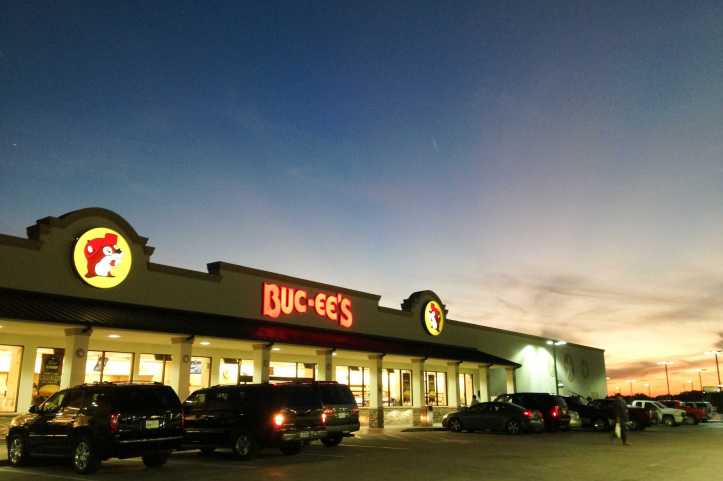 (Lake Jackson, TX) It was in this historic town, Lake Jackson, TX where the legend began. Two friends, Arch “Beaver” Aplin and Don “Chipper” Wasek, met over coffee and had the conversation that would lead them to a multimillion dollar chain of convenience stores across the Texas landscape. “I want to sell gas, peanuts, and beef jerky to truckers. Is that something I could turn into a business? Or should I consider that more of a hobby?”

“Beaver,” replied Don, “I think you’ve got something we here in Texas like to call: a good idea.”

“Sarsaparilla!” exclaimed Beaver, and the seeds of providence were sown.

***trigger warning: this article contains violence and graphic depictions of a fist fight***

Jump ahead 21 years to 2003. Buc-ee’s has become a huge commercial success. Beaver and Chipper decide to open a second store in Luling, TX, much to the chagrin of local firefighter and part-time beaver trainer, Byk Uspid. “These folks over at Buc-ee’s don’t know the first thing about what beavers are actually like. I have spent my entire adult life around beavers and let me tell you, they would never wear a hat.”

What Mr. Upsid was referring to, of course, is the notorious Buc-ee’s logo and mascot, pictured below.

This mascot is one of the main reasons for the convenience chain’s enormous success. Don and Arch began running billboards all across the Lone Star State, advertising their store, sometimes even as far as 80 miles from the nearest location!

Slogans seen on these billboards include: Beavertastic!, We got Jerky Over Here!, and Worship A Smiling God. These billboards became well known by Texas drivers and soon enough, everyone was visiting their store just so see what all of the hubbub was about.

Pretty soon, Beaver and Chipper were feeding almost everyone in Texas their homemade fudge and Beaver Nuggets. However, things were about to take a dark turn in their business partnership, but more importantly, their friendship.

You see, the success was beginning to go to Don’s head. He came to Beaver one day and told him that he thought they should open a store in Florida. “We could take advantage of their swampy moors, turn a profit and clean their floors.”

“Oh Icarus, have we not learned from your Fall? This man would have us sell our souls to become a shopping mall,” replied Beaver. For some reason, they both had become very dramatic with their increased wealth, often speaking only in rhymes.

“Icarus may have burned, but not shall I. You have been my friend for many years, use your eye. This bog state is ripe for the plucking, stop being a loon and let’s do some Buc-ing.

“You insect, you gremlin, you absolute fool! We will never leave our home state of Texas for the sake of being cool.”

With this, Don turned to leave for the door, but not before turning to Beaver and saying “Later skater.”

These two men would not speak to each other for another seven years. All of their communication was done through proxies and even though Don kept fighting for it, they never built a store outside of Texas. It was on June 22nd, 2013, when the two men finally reconnected.

“Well your nose looks dead,” jabbed Beaver. Both men erupted with laughter and embraced in a hug.

“I’ve missed you,” cried Don into Arch’s shoulder. “What could ever have separated us?”

Beaver ended the hug in order to wipe a tear from his eye, slightly laughing. “Florida,” he said to Don. But, as soon as he said it, Arch realized he had made a mistake. Don’s eyes had become red hot, almost impossible bloodshot. Before Arch knew what was happening, Don tackled him to the floor and began whaling on him with clenched fists.

Carol, Arch’s receptionist came in to see what all of the commotion was about, but when she saw the two men fighting she remembered what her and Mr. Aplin had agreed on: Lock the door and reward the victor. Carol then promptly closed the door, locking it behind her, and went to get the paperwork.

After dealing several significant blows, Don realized he had worn himself out too quickly. Arch noticed this as well and began to redouble his efforts to knock his former friend and lover off of him. He succeeded in reversing their positions and began to choke Don with his bare hands. Don struggled to reach for his pocket, but after a few seconds of searching he found his Bowie knife and brought it straight into Arch’s side.

After pushing his body off of him and standing up, Don took one last look at his former partner as he lay in his own blood. Just as he was about to turn and leave, he heard Arch try to speak. He was having trouble understanding him so Don went closer. Arch looked him dead in the eyes and utter his final words, “Never Florida.”

Don watched as his friend passed into another plane, holding his arm and stroking it softly. After a few minutes, Don emerged from the office, covered in a mixture of Beaver’s blood and his own. Carol returned just as he appeared, and like a true professional, she hid her emotions and had him sign the papers.

“Congratulations Mr. Wasek,” she whispered. “Buc-ee’s is now yours.”

Thank you for joining us on this trip down memory lane. Also, don’t forget to check out Buc-ee’s Florida, opening in Spring of 2018.