Billboards: The Backbone of Our Nation 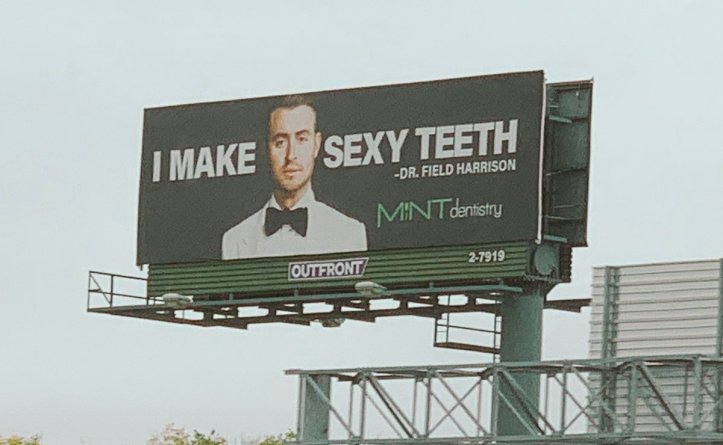 Take a moment and close your eyes. Enter the Brain Zone™ and let your imagination run wild. Now, picture a world in which billboards have been banned. No, even worse, imagine they never existed. How depressing is that? Billboards are the backbone of our nation, but so many people take them for granted. How would you expect to pass the long hours on American highways without the constant reminder of capitalism? Today, I want to celebrate the billboards of this country with this exploration of how they have shaped us, our values, and the way we experience time.

My first memory of a billboard is from when I was only 3 years old. My family was on a road trip through Kansas and there in the distance I saw a large black rectangle with enormous white letters asking “GOD?” As we passed, I felt the question reverberating through my tiny 3-year old brain. What was a GOD? Should I know by now? Who lets someone just throw up words like that on the side of the highway? It was my first religious experience.

As soon as I could understand the various complex human behaviors needed to do research on the subject, I went to the library and pulled up the History of Billboards. It told me that billboards had originally been invented by Bill Business, a wealthy Texas oilman and seller of high quality boiled denims. He had the radical thought to put up a huge poster detailing how to find his business. Soon, Bill Business was booming and all thanks to a board he had put off the highway. This is when Bill had another thought.

He start selling Bill-boards to other businesses in the area, charging a monthly fee to rent out the large walls he had been constructing on the side of the highway. Billboards caught on and soon, competition was cropping up all over American highways. Of course, being the shrewd businessman that he was, Bill copyrighted the concept of billboards and has been making money on every billboard erected ever since.

It is people like Bill Business that keep our country moving forward, that understand what it takes to be a True American. Just ask the guy behind Buc-ee’s, he gets it. So next time you see a billboard out on the highway, smile to yourself knowing that you are participating in an American tradition on the same pedestal as baseball and apple pie.

And, if it happens to be the Fourth of July, go ahead and blow something up. You deserve it.

This was written by Nathan Ellwood, who enjoys long baths in the grotto and short walks through the shadows. Follow him @NPEllwood.