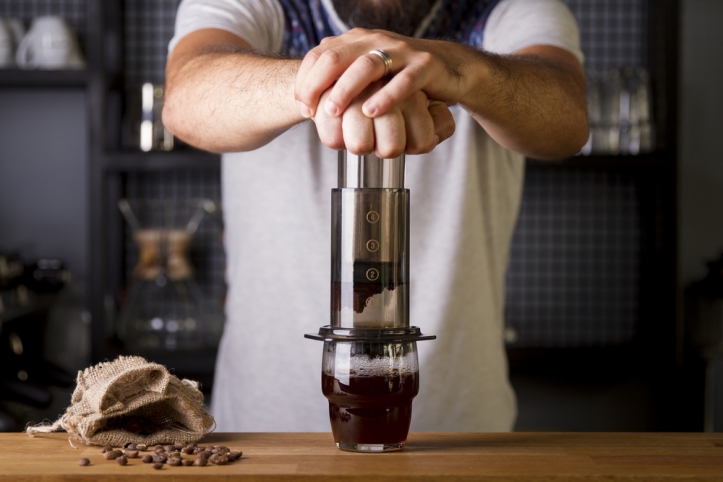 (Salt Lake City, UT) Jacoby Marksman is just your every-day man. He works at a haystack farm stacking haystacks and he’s married to twenty-seven women. His life, by most standards, is average. However, Jacoby has recently started doing something that he believes, is quite cool. “Yeah, I just started making my own cold-brew and I am really excited about it. Do you want to try some?” No, Jacoby. You’ve offered me some like twenty times. No one cares about your cold-brew anymore.

Last year, while growing a beard instead of developing a personality, Jacoby also started brewing his own cold-brew. “I started off doing it as something I could add to my Tinder bio, but then I really fell in love with it. I mean, grinding up the beans, mixing up with the water, letting them sit in the fridge for 18-24 hours, it’s passionate work.”

We spoke to Jacoby’s many wives to see if they felt the same way about his “passion project” as he did.

“I would’t mind it so much, but he just keeps offering me more and more coffee. I have trouble sleeping. And when I can finally glimpse that long sought after solace, I wake to him asking me to try his new recipe,” Gloria was on the verge of tears. “I need to get out of here.”

“I liked it at first, you know? I mean, Jacoby is just an average guy, he never had anything special about him. That’s what we like about him. But now? Ugh. Now that he can make cold brew he thinks he’s hot shit all of a sudden,” said Agnes.

“I tried this one recipe called “Marksman Bow Brew” and I genuinely think the secret ingredient was sand. It was horrible,” shuttered Bronwyn.

“This is just like when my last husband got really into making his own furniture. Yeah, I guess it was cool at first, but he kept making things we didn’t need and our house was so full of his stuff by the end I don’t even know if he could leave. I just squeezed through a window and went to start my new life in Utah,” reported Gerscwhinn.

Despite all of this unfavorable talk amongst his family, it seems that nothing will stop Jacoby and his reign of terror. “I am thinking about opening up my own coffee shop, but it wouldn’t be like your normal coffee shop, you know? Like you would be scared to go there.”

He went on, but we were so tired of hearing him talk that we kind of zoned out and then wandered off a few minutes later without formally ending the interview. Oh well. We wish him the best of luck with whatever he was talking about so much. God. He really just wouldn’t shut up about it.

This article was written by Nathan Ellwood, who really just used this article to let you know that he has started making cold-brew and really wants to talk to you about it. Follow him for more on Twitter @NPEllwood.