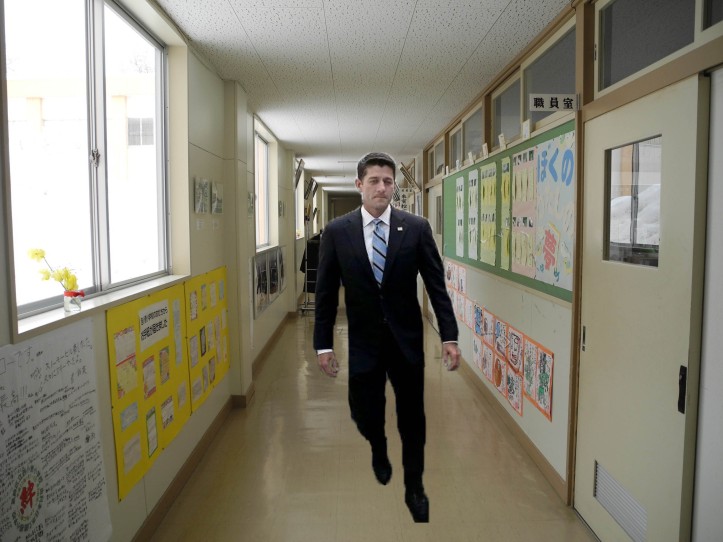 (Janesville, WI) After announcing his intention to not seek re-election earlier this week, Paul Ryan has now announced that once he is done ‘serving time’ as a senator he is going to return to his post as hall monitor for Washington Elementary, right here in Janesville. Although it may seem to be an odd choice for a former senator, Ryan went on to explain that this was something he had ‘always wanted’ and ‘dreamed of since before the Bad Times.’ However, there is more to this story than meets the eye. Come in, sit down, let’s have a chat.

This is the bombshell: Paul Ryan was never hall monitor as a child. Boom. Blew the whole thing wide open.

That’s right. We reached out to people who knew Ryan in elementary school and they all told us that even though Ryan desperately wanted to be a hall monitor, he was never allowed due to his obnoxious opinions and general lack of authority in regards to the school’s social hierarchy. Instead of stopping other children in the hallway during his interview, young Ryan would yell in a loud, mucus-y voice “You guyyyyys, stop it. Teacher will be mad.” Which resulted into more being shoved into a locker than being a good hall monitor, so he did not receive the job.

Over the years, Ryan tried to take on other roles that fit what he believed to be the perfect hall monitor attitude. In high school, Ryan tried to be a teacher’s aid for every single one of his teachers, only to be denied because according to them he ‘freaked them out with his smell’ and ‘might not be a good fit for Cooper High.’ Undeterred, Ryan went on to college, a place people had been telling him for years he would finally thrive.

As soon as he could, Ryan signed up for a job as an RA for his dorm, essentially a glorified hall monitor. Since Ryan was in a new place, no one knew what a mistake granting him this power would be. Over the half-semester Ryan was allowed to govern his wing of the dorm, twelve of his residents left the school and three sued for emotional trauma. No one really knows what happened in that hall that year, but it was all that a baby-faced Paul Ryan needed to sink his teeth into until he had that power again.

Over the course of his career, Ryan accepted new responsibilities, even becoming Speaker of the House, but all he had truly wanted was to be a hall monitor. Now, he has that chance, and he is willing to give it all up for it. We wish him the best of luck in his quest to continue being the worst man in America.

This article was written by Nathan Ellwood, who would like to clarify that yes, Paul Ryan is the worst. That’s not satire, that’s him being the worst in real life. Follow him for more on Twitter @NPEllwood.