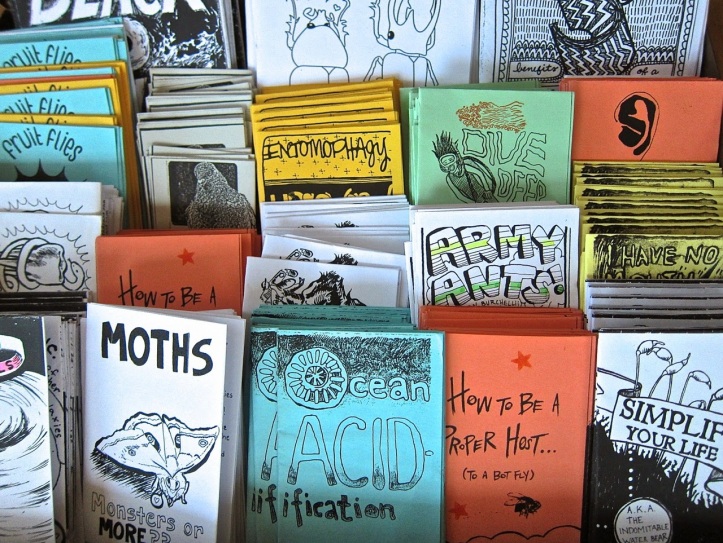 (Columbus, OH) Hey there you zany kids, let’s chat. Have you ever felt like the world just doesn’t understand you? Like there is something you need to say, but you aren’t sure that anyone would listen? Huh? Speak up, I don’t got all day. Well, you may not realize this, but there is an art form perfect for you and it’s called a ‘zine.’ Originating seemingly out of thin air, zines have been around for decades and can be found at independent bookstores everywhere. Often zines are not mainstream enough for formal publishing and thus are left in coffee shops hoping to be read by anyone with an interest. And guess what? Today we are going to teach you how to make one.

That’s right, we’re peaking behind the curtain and taking a look at the nitty, gritty world of zines. With this knowledge in your brain, who knows what you will be able to accomplish? You may effect the lives of dozens of people, mostly on accident! Isn’t that great?

I know what you’re thinking: “Get on with it!” Am I right? Well listen, I am.

Step one: purchase a pillow and learn how to scream into it.

Practicing proper pillow screaming technique is vital to the zine creation process, so get good at it for your own benefit.

Step two: summon a long-forgotten god in your linens closet.

Most zines are created by long-forgotten gods, using a human proxy to get their message on paper. However, long forgotten gods are notoriously bad negotiators and never land publishing deals, which is why their work is most commonly found in zines. If you don’t have any ideas for a zine, you can always summon a long-forgotten god. #lifehack

Without a photocopier, the only person reading this will be your cat, probably while she is eating it. Buy a photocopier.

Since zines exist out of both space and time, you can write whatever you want. It’s nuts. Unlike with websites, where every single statement must be true according to the Internet Code, nothing is off limits with zines. I once read a zine I found under a dumpster that was simply a picture of the first time I saw a butterfly. I’m not sure how it came to exist or what the purpose of it was, but I’ll never forget it. That’s generally the kind of reaction you want with your zine.

Now that you have a good first draft done, you need to indulge yourself in some leisure activities. Repenting of sins has been a popular past-time for thousands of years, so have some fun and tell whatever god you believe in exactly why they should spare you, you pathetic imp.

Step seven: just have fun with it.

The most important part of creating a zine is to just have fun with it. In the end, nothing matters, but if you are writing a zine you probably already know that. But hey, at least you got to become friends with a long-forgotten god, so that’s something.

And that’s it! Don’t forget to immediately print off 100 copies of your zine upon completion and then cast them to the wind, they’ll end up where they need to go.

This article was written by Nathan Ellwood, who just realized that this whole thing was a zine for the last 100 years. Whaaaa? Yeah, plot twist. Follow him for more whatever this is on Twitter @NPEllwood.