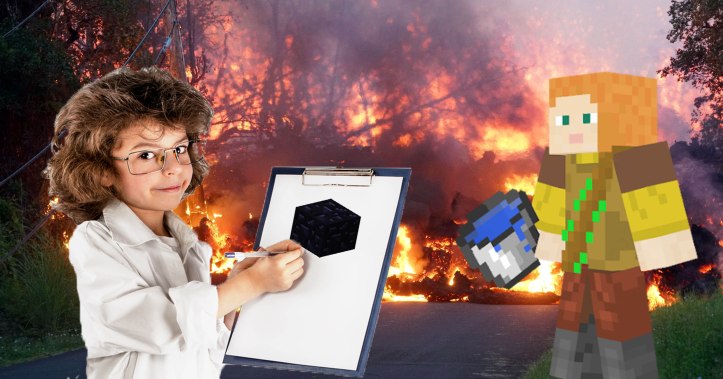 (Walmea, Hawaii) Ever since the eruption of the Kilauea volcano on Hawaii’s big island on May 3rd, scientists from across the nation have come together in order to help keep island inhabitants safe. Many have advised evacuation and simply letting the volcano “do it’s thing.” Others believe that we should bomb the volcano, hoping to counteract the outpouring of magma and molten lava. However, the latest and quite possible hottest take that has emerged comes from an unlikely source. According to reports from multiple cities, it seems thousands of the nation’s fifth graders have come together to offer an interesting idea that’s so crazy it just might work.

At a press conference at Waldorf Elementary in Sacramento, this group of fifth graders suggested that Hawaiian officials simply pour water on the lava in order to turn it into obsidian. Apparently, after doing some Googling, we learned that this is a method that comes from the popular video game Minecraft, where players can create this rare mineral by pouring water on top of the lava. Unfortunately, when we asked a resident volcanologist if this would be effective, he was unavailable for comment.

The fifth graders went on to explain how this plan would help more people “enter the Nether” and “fight the long war against the zombies.” Again, we believe that they are still referring to a video game and not real life, but it’s hard to tell with fifth graders, you know? It’s like, what are they even talking about?

After the press conference, we were able to catch up with one of the parents of said fifth graders Laura Michelin. “Oh I think it is great what they are doing. I mean, who’s it hurting?”

While we would normally agree with Laura, it appears that a local Hawaiian fifth grader had heard of their plan or had the same idea for himself, for we heard reports that he had approach the lava in an attempt to quell the rolling tide of flame with a simply wood bucket. Thankfully he escaped with his life, but we are sad to relay that his shoes are now permanently a part of his feet, as they melted onto them.

How much longer will we sit by and let this volcano hurt us like this? When are we going to take a page out of the fifth graders book and start actually working on solutions instead of just talking about it? Won’t anyone be a savior and come swooping in with something that will save us?

I mean, obviously not the water thing, that’s just ridiculous.

This article was written by Nathan Ellwood, who loves Minecraft almost unashamedly. There is a little bit of shame tho. Follow him for more on Twitter @NPEllwood.