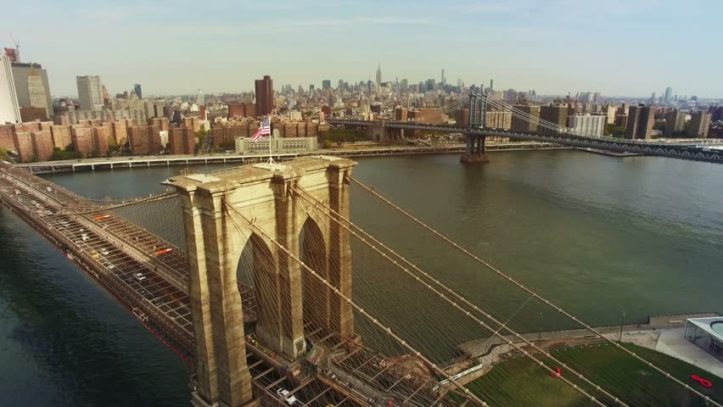 “Hey I’m walking here!” shouts the disgruntled man as the rain comes pouring down. The city streets are full of yellow taxis and black limousines weaving their way through the river of traffic, dodging jay-walkers and dog-walkers alike. The camera moves to the side of the street and zooms in on a familiar face that comes into focus. It’s someone you like, that’s why you rented the movie. Now the familiar face is answering his phone, he’s walking down the street towards his destination, when suddenly a black hood is placed over his head and thrown into a van by a group of masked men. The movie title takes up the black screen as the theme begins to play. You are excited for the movie, but still not sure where it takes place.

Suddenly the music turns from foreboding to bumpin’ and we cut to a zooming helicopter shot of a large, hybrid cable-stayed/suspension bridge spanning a dark river. Before you can think too much of it, there is another shot of people commuting followed by a shot of a large, triangular building. We see the same protagonist working in a cubicle, looking more well-nourished and well-groomed than last time we saw him. Apparently, this takes place in the past.

After a quick introductory scene of the protagonist and their boss, we see another shot of this same iconic bridge. Again, you can’t remember where that bridge is supposed to be, but the next scene is of the protagonist and his girlfriend walking across it. A biker passes them and at first we don’t hear their conversation, but soon they come into frame and the mic pics up what they are saying. “I mean I like Brooklyn but I don’t like like it, you know?”

Suddenly it hits you as the conversation continues and the protagonist leans on the brick supports to take a picture of his girlfriend, it’s the Brooklyn Bridge and they’ve been in New York this whole time! Wow. Who knew that they even made movies in that city, what a bold directorial choice.

Well, another mystery solved! Time to put this movie back on the shelf and rent another. I wonder where this one will take place. Personally, I hope it’s one of those thrown together conglomerations of cities that makes you feel like you are looking into an alternate dimension. Those are my favorite.

This was written by Nathan Ellwood who consistently calls the Brooklyn Bridge the Golden Gate Bridge and always mixes up The Big Apple with Tharizdun, the Chained God. Follow him (Nathan, not Tharizdun) @NPEllwood.