You are Not Immune to Stacking Your Dice 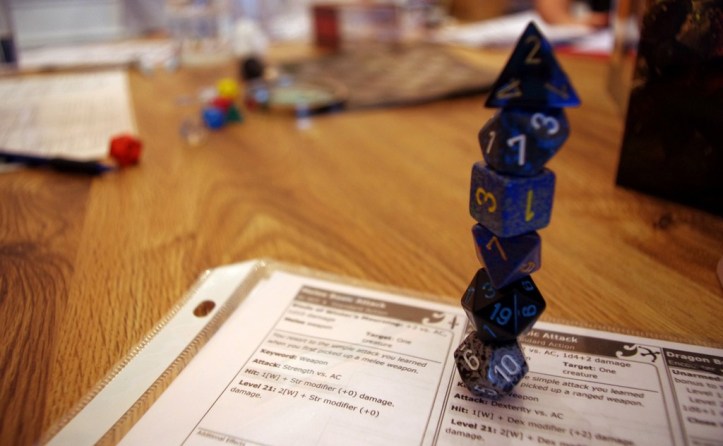 Where were you the first time you saw a D20? Can you picture it? For me, I had just finished making my character sheet for my first game of Dungeons & Dragons and I had no idea what I was getting into. When the Dungeon Master, a friend who had invited me to join his campaign, first pulled out that die, I knew that something magical was about to happen. He handed it to me and told me to roll it, just to try it out. Before I knew what was happening, I had multiple sets of dice myself and I was completely lost in the world of the game. But, like all of us, I wasn’t immune to the simply joy of stacking my dice.

Each has a specific purpose and function in the game, but the most commonly used is the d20. While you are using the d20, the other dice sort of just sit there. Plus, there are moments when you aren’t using your dice at all, so of course you start to do things with your hands while others are either role-playing or taking their turn in combat.

This is when the stacking occurs.

Now, by this point, I’m sure everyone has a different strategy for how they take on this question of stacking. For me, I always start with the d6. Or as I like to call it, the Yahtzee die. It’s a square, unlike the rest of them, making it the perfect plinth.

From there, it’s a toss up. Sometimes I do the d20 as the second stack just to get it out of the way, but it ends up ruining the structural integrity of the whole thing. Other times I go for another sturdy base piece like the d8 or the d12.

After two, I’m already nervous, so the rest is just completely up in the air. I don’t think I’ve ever taken the same pattern here. The d10s really just throw a wrench into everything.

But of course, the tippy top must always go to the d4. Shaped like a tiny pyramid, it can’t go anywhere else in the tower. It’s like the star on top of a Christmas tree. If you play with someone who can use the d4 earlier in their stack, be aware that they magical in real life because that is some disturbed shit.