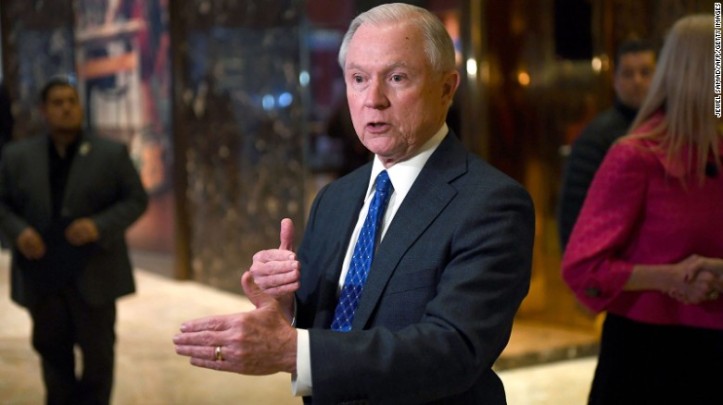 (Washington D.C.) In an impromptu press conference, Attorney General Jeff Sessions told reporters that while he doesn’t typically care for movies or experiencing joy, he is really hoping that 1939 film Gone with the Wind takes home the coveted best picture award. He added, “Clark Gable’s performance is second to none and I hope he takes home the best actor award as well, but I don’t want to get greedy.”
Reporters, myself included, were very confused as to how we had even arrived at the press conference, as none of us could remember even receiving notice of any meetings with the Attorney General on our schedule. The second reason we were perplexed was that the room in which the press conference took place didn’t seem to have any visible entrance or exit to speak of. In fact, the room itself didn’t resemble anything that I had ever seen and resembled more what you would expect to find inside of a deer carcass.

“I also truly hope that Vivien Leigh can take home the best actress award,” Sessions continued, “She really gave it her all. Obviously she wasn’t as good as Clark Gable, but she was good, considering.”

“You know, Hattie McDaniel, she played the role of Mammy and is up for best supporting actress. Do you hope that she wins as well?”

“Yeah I have no idea who that is, but the obvious choice for best supporting actress is Edna May Oliver in Drums Along the Mohawk. She was wonderful.” Sessions appeared to not understand who Hattie McDaniel was or the fact that none of these people were still alive, much less able to win Academy Awards. “I will now take a few questions.”

“Mr. Sessions, you do realize that the movie you are talking about came out almost 80 years ago and all of the actors are no longer living, right?” I asked the question that I figured was on everybody’s mind, but all I received was confused glances from my constituents.

“Now I hate to borrow a term from my good bud Donny T,” Sessions laughed to himself, “But what kind of fake news dribble just came out of your maw, boy? I have no time for this foolishness; I have a game of hoop stick to get to in a few minutes. I can take two more questions.”

I still couldn’t get over being called fake news, or the fact that apparently I was the only one who found the attorney general’s comments concerning, so I asked a follow up question. “What about Moonlight? Or Hidden Figures? Do you have any comments about Viola’s earth shattering performance in Fences?”

In lieu of a response, Attorney General Jeff Sessions took two steps backwards and began to slowly ooze into the wall behind him. Up until this point, I had assumed the wall behind him was just a plain, red wall, but as we all soon became painfully aware, the wall was made of pure flesh. After a full 30 seconds of slowly slipping into the pulpy backdrop, he became completely consumed and disappeared from our view. A few moments later I was sitting in my childhood bedroom, gripping a G.I. Joe action figuring and quietly weeping. It was as if I was living in a memory, but I was fully aware of my place in time and space.

Once I finally made it to the office after a 4 hour commute from my hometown of Scranton back to D.C. I wrote down as much as I could remember of the morning’s events and have yet to be able to convince any of my colleagues that this truly happened. Even as I think on it now, I am not sure that is was more than a dream, but then I look down at my hands and see the unmistakable stain of deer bile and I know too well what occurred.

Don’t forget to tune in to the Oscars this Sunday at 7:30 central time. Will it be Gone with the Wind that takes home the big prize, or will the crowd favorite Of Mice and Men win the upset? I guess we’ll find out together.

This article was written by Nathan Ellwood, who will be live tweeting the show on Sunday evening, hoping that the dreams, or nightmares, will not return. Follow him for more on Twitter @NPEllwood