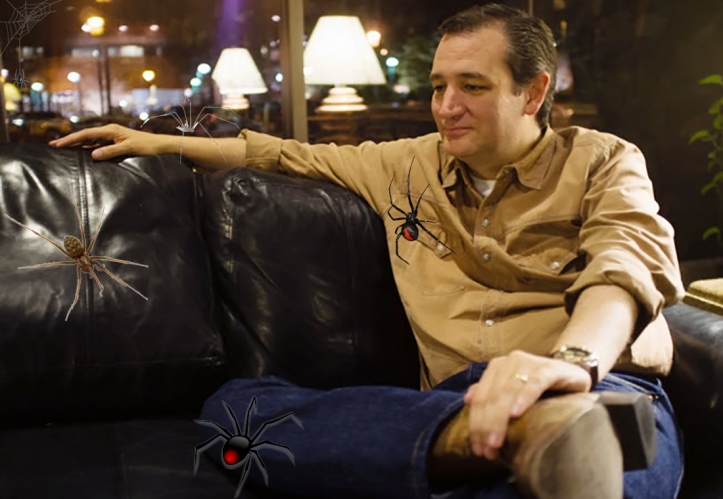 (Houston, TX) Late Tuesday night it was announced that Texas Democrat hopeful Beto had been beaten by Ted Cruz, the incumbent Republican Senator. While much will be written about the campaign, we were more interested in catching up with both candidates soon after the race was called. Beto told us he wanted to be with his family, but Ted Cruz was more than happy to have us over to his home in Texas to see how he was celebrating the win. “Oh it will probably just be me and the spiders,” he told us over the phone. “Also it’s BYOB.”

4 hours later, we were standing at the Cruz family’s front door, ready for anything. Ted himself opened the door and told us to come in and make ourselves at home. Without looking back, he began walking through the entryway back into what we discovered was his home office. He picked up a cigar off of an ashtray on his desk and then finally acknowledged us again. “Sorry,” he said between puffs, “Had to get back to this. You know.”

Motioning to the nearby chair and loveseat, Senator Cruz told us to take a seat. We were just about to do exactly that when we noticed something on the love seat: a massive spider. Jolted by this sight, I tried to look elsewhere to find my reference before looking again, but when I looked elsewhere, I saw even more spiders. Close to 12, that we know of, were jumping around the room and making themselves at home along side us. Cruz noticed our apprehension and tried to reassure us. “Don’t worry about them. Those are mine.”

Trying to believe him, we scooted the few spiders that were blocking us from sitting and gingerly sat down on the love seat. We were just about to ask him a question when he interrupted us and began to speak in monologue. “These spiders are my friends, so please don’t be frightened. All I was hoping that was that you day would be brightened. My home is yours to enjoy, so please don’t be shy. Now watch out, there’s a spider near your eye.”

“Are you speaking in rhyme? And what was that about a spider?” We asked, unsure what was happening. Honestly, the whole thing felt like a dream. Just as we were checking ourselves for spiders, Cruz began to sing in the same style of tone he had been speaking. His words sounded like they were right, but upon reflection we couldn’t remember a thing he had said. We were too distracted by the spiders on our heads.

As we ran away from Cruz’s house, we could hear a horrible sound. A sound that will haunt me for the rest of my life. It was the sound of Ted Cruz being joined in chorus of spiders, singing a song of his own composing. It was ghostly and awful and made me cry for some terrible reason.

Honestly, I am just glad we made it out of there with our lives. But, we must do it for the readers.

Is anyone still reading this? Oh god.

This article was written by Nathan Ellwood, who would just like to give out one final Betoooooooooooooooooooooo. Follow him @NPEllwood please and thank you.