‘Why is Mike Pence Always Smiling That Warm, Toothy Grin of His?’ A Thinkpiece 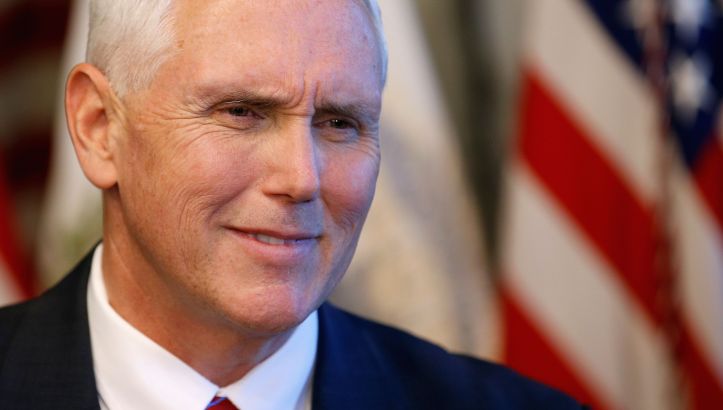 Why is Mike Pence always smiling that warm, toothy grin of his? What is it that fills him with such glee that he must shows us where his skull is exposed at all times of the day? There are times for being sad, Mike. Not everything in life is a constant joyride like you might think it is, bud. There is a lot of life that won’t make you show off your pearly whites. There is so much more that will make you show us them, but for reasons unpleasant to imagine. In today’s thinkpiece we are going to explore why Mike Pence is always showing off that horrid, haunting grin. The answer will probably not surprise you.

Let’s first take a look at the last year of what MP the VP has been up to. Looking through our files here it looks like he has done “Not much.” He has simply spent his time since the inauguration making ill-timed statements that come across tone-deaf, but other than that he has not sought the spotlight. The one thing that Mike Pence has been doing since he took the office of Vice President a lot is grinning. That warm grin now comes to me in my dreams, turning them immediately into nightmares.

Listen, I don’t think you understand. I have had to look at pictures of Mike Pence’s warm smile for every single day for the last year. A grin that can be described as both ‘warm’ and ‘sinwey,’ it seems the American public can’t get enough of it. Maybe because we are all imagining him as president and unsure if that would be better or worse. Or maybe we just hate ourselves and can’t help but seek out that which we fear the most. I honestly do not know anymore.

So, why does he smile? Why does he grin? This is why we are gathered here today. Now, some believe that Pence’s neverending grin is due to his love of his wife and non-seadevil Karen. Pence loves his wife in the most non-creepy way of all time: by never being around other women. Some claim that Pence doesn’t even know what women are. This intimate relationship might be the reason for his constant cheerfulness. Although most of the time I don’t associate Pence’s grin with happiness, more like slight pain or wearing a mask of another man’s skin, so that’s probably not it.

He might also be smiling because a friend of his who none of us can see tells him hilarious jokes every waking hour, leaving Pence in a constant state of euphoria. Also not right, but closer.

Ah, it could be that Pence only buys his clothes from a tailor that makes suits out of a material that tickles you in the slightest way possible. Only, Pence is too much of a man to be tickled, so he holds a constant grin so that he can grit his teeth without seeming to be a man distraught. But we don’t think that this is the reason for his hot, cartilage-filled smile.

We think it is because he is truly a lost man. A man who took a wrong turn in life. A man who never knew when to tell a waiter ‘when’ while having his salad made. Pence, listen to us, it’s not too late. You can be found. All you have to do is send us 100 dollars for each invasive thought that you have and then we will hunt them down in our time machine and banish them from existence. Trust us, we did the science and the math and this is the only way for you to find enlightenment.

Send us the money, Mike. You know you want to. Come find us, Mike. We’ll be in the tunnels.

This article was written by Nathan Ellwood, who loves the tunnels! Follow him for more of this nonsense on Twitter @NPEllwood.