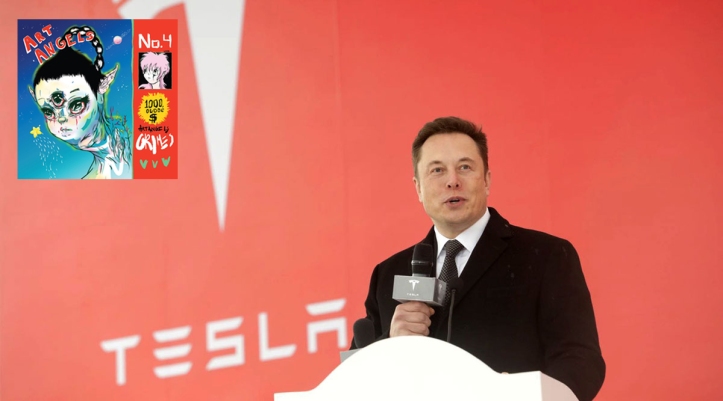 Just in: The Elon Musk and Grimes dating saga continues, this time with corporate sponsorship. In a press conference that was supposed to detail Musk’s future plans for Tesla and Space X, the South-African billionaire instead took time to address rumors about his relationship with the 31-year-old Canadian art pop star who has started going as simply “c,” but who you likely known as Grimes. “Things are going well with my wonderful lady and we can’t be happier,” Musk told tech reports who realized they had just struck gold. “But I’m not here to talk about my anime princess, I’m here to talk about Tesla. I am excited to announce that starting immediately, all Tesla vehicles will come pre-loaded with my cool girlfriend’s entire discography.”

Now, if you are a Tesla investor, you might be on the verge of pulling out your hair and running to the nearest H&R block to put your money in a less volatile business. However, before you do so, it’s worth hearing out exactly what ensued after this announcement was made and the follow-up questions that were asked. As always, it is important to know all of the facts before making serious financial decisions.

Just after detailing the specifics of exactly which songs will be included in this update (LPs only, but you can pay more for deep cuts), Musk turned the conference over to reporters who were eager to ask further questions about this exciting new initiative. “Hi there, Kenneth Shotsfield, CBS News. Aren’t you worried about the backlash you might face considering the uproar a similar promotion involved Apple and U2 caused several years ago?”

“The past is the past,” shrugged Musk. “Next question.”

“As a businessman, how does it make sense to give out free music when you could charge for it instead?” asked another reporter that was dancing from one leg to the other, as if he had to go to the bathroom.

“Well here’s a little business tip for you there, guy. Sometimes if you spend a little bit extra to give your customers something for free, they will buy 40,000 dollar cars from you in return. Also, and don’t tell c that I told you this, but her next album is pretty experimental and we’re not sure how many people will actually buy it. But it has such an important message that we want to make sure people hear it,” he then took a sip from his glass of water and concluded. “Honestly, hat’s pretty much the only reason we’re doing this.

“Final question here from Marsh Whitman at BBC Television. What is the ultimate goal of this relationship with Ms. Boucher?”

“I feel like that’s obvious,” Musk chuckled along with a few more seedy male reporters. “Why to be the first person to enter a black hole, of course.”

OK, we take it back, sell all of your Telsa shares as fast as you can. This ship’s going down and the captain seems to be the only one ready for the descent into hell alongside his celestial partner. Godspeed, nerds, godspeed.

This was written by Nathan Ellwood, who ate the last churro and Azealia Banks is who you can reach to discuss that further, Claire. God, stop being such a weirdo Claire. Follow him @NPEllwood.